Another version of this piece can be found on the Robbins Library blog as “Sew what? Fashion and its snags”

It surprised my friends and family when I started talking about this book, because I am not really interested in clothes – I’m certainly not “fashionable” – so why would I read a book about fashion? The truth is that I heard about this book a few times from different sources (NPR, etc.), and when I picked it up, I realized that Cline had several convincing points to make about the current state of cheap fashion. 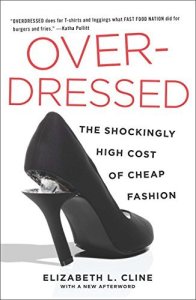 Overdressed: The Shockingly High Cost of Cheap Fashion by Elizabeth Cline (2012) examines the state of “fast fashion” today, traces its evolution, and explores its impact on the garment industry, the planet, and our closets.

In short, she argues that it’s really not a good thing that we can buy a shirt for $4: consumers, garment workers, and the environment would all be better off if we made and bought less clothing, but made it well and took care of it. Though this used to be the case, it isn’t anymore. As Cline writes in her introduction, “We’ve gone from making good use of the clothes we own to buying things we’ll never or barely wear. We are caught in a cycle of consumption and waste that is unsettling at best and unsatisfying at its core.”

Cline writes, “Textiles have always had an unflattering environmental footprint, but the more pressing problem is the terrifying scale at which they are now being produced” – and the volume in which they’re being dumped in landfills. In between, underpaid workers in foreign countries make the garments, because “the demand for cheaper and cheaper garments has all but wiped out the American garment industry,” and consumers’ closets are full of things they don’t wear. Clothes become easy prey for those who are “KonMari-ing” their homes, and even most of those that are donated to Salvation Army or Goodwill end up in the trash.

Cline cites some pretty stark numbers. For example, “Every year, Americans throw away 12.7 million tons, or 68 pounds of textiles per person, according to the Environmental Protection Agency, which also estimates that 1.6 million tons of this waste could be recycled or reused.” Clothing is cheaper than it used to be, so consumers can buy more of it, but, accordingly, it is lower-quality and doesn’t last as long.

If all this bothers you, what can you do about it? Assuming you’re not in charge of Forever 21, H&M, or Zara, Cline presents a few ideas for the average person:

*Cline notes, “As people moved away from making their own clothes, general public knowledge of garment construction faded.” It will take some work to regain that knowledge, but I am interested in learning more – I just checked out a few books on sewing from the library, and have learned a few things already (e.g. what a French seam is). Toward the end of the book, as Cline explores the nascent “slow fashion” movement and experiments with making her own clothes, she enjoys the freedom that comes from choosing prints and patterns in her own style, instead of being confined to what’s available in stores. As someone who will wear the same clothes until they fall apart, I want clothes that are “timeless” instead of trendy; if I could make my own, I wouldn’t have to look.

Overdressed probably could have reached a wider audience in the form of a long (New Yorker-length) essay; given its length as a book, I think it actually could have been much more forceful, given that nearly everything about the fashion industry today is terrible for the environment, workers in the industry, and consumers. Today’s fashion trends aren’t improvements on yesterday’s; they’re just different. As Cline writes, “Unlike the world of technology, where rapid innovation produces improvements, innovation in fashion just produces arbitrary stylistic changes.”

Have you read anything else on this topic you’d recommend? Do you make your own clothes, or would you like to learn? More broadly, what other books have prompted you to consider making changes in your life?