It is Banned Books Week again (a.k.a. Freedom to Read Week). I’m going to quote from Rob’s BBW/FtRW post from the Robbins Library blog:

During Banned Books Week, we celebrate the freedom to read. As you can imagine, this is most librarians’ favorite theme week; after all, as our code of ethics states, “We uphold the principles of intellectual freedom and resist all efforts to censor library resources.” But you don’t have to be a librarian to enjoy Banned Books Week – all you have to do is read!

(The word “Banned” is in quotation marks in the title of this post because the name “Banned Books Week” is a bit of a misnomer.  First, we celebrate Banned Books Week not because we like or support books being banned – we celebrate to support intellectual freedom and the freedom to read whatever you want.  Second, it’s now much more common for books to be challenged than actually banned, thanks to the efforts of teachers, librarians, and other supporters of the freedom to read.  You can read a bit more about Banned Books Week here (or in our blog archives here) and check out a few lists of books that have been banned or challenged here & here.)

They link to a few of my Banned Books Week posts for the blog from past years, as well as the ALA site. Here are ALA’s infographics for this year: 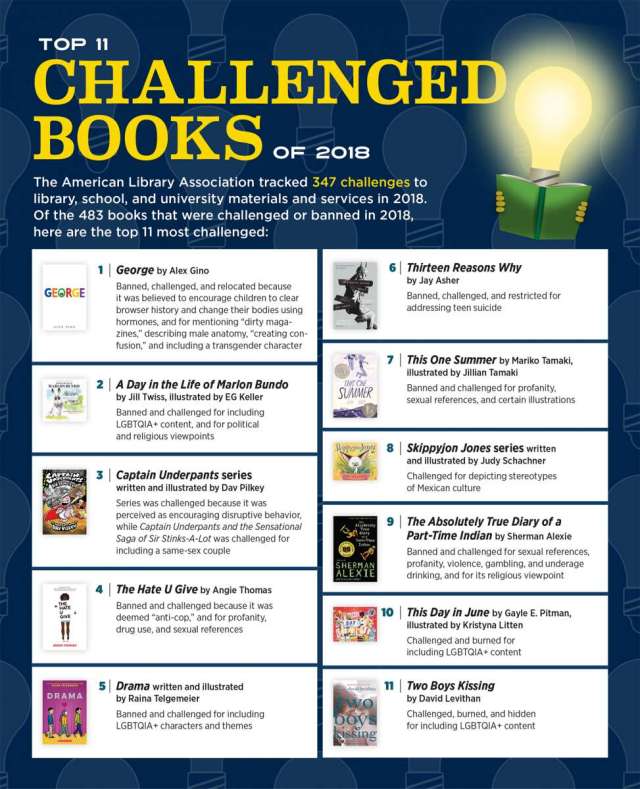 There is a difference between a challenge and a ban; there are many more challenges than bans. And just because a book is removed from one library, that doesn’t mean it’s removed from all of them, or unavailable at bookstores or online. But you’ll notice that almost all of these titles are children’s or teen books, and kids don’t always have options beyond their school library (if they’re lucky enough to have a school library and librarian) or their local public library. If a book is removed from those places, it’s effectively unavailable for that kid.

It’s easy enough – for many of us pro-intellectual freedom types, at least – to see a story like the recent one from Nashville, Tennessee, where a Catholic school banned the Harry Potter series, and rail against it. Most librarians – and plenty of teachers and parents – believe that while parents do have the right to decide what their own children can and can’t read, they do NOT have the right to decide that a book should be unavailable for everyone.

However, there’s a subtler kind of censorship that I see a lot of, and I’m sure I’ll have moments where I wrestle with myself about this as well: the “is my kid ready for this yet?” question. Parents with eager, advanced readers, especially, see their kids racing through all the chapter books and middle grade novels and into the teen section. They’re concerned that their readers will encounter bad language, violence, sex, drugs (maybe even rock ‘n’ roll), etc.

So far, I’ve developed four responses to this: one, of course, is to talk with the parent (and the kid!) about the books they’ve liked, and suggest any others I can think of or find along those same lines, without going into more mature territory. Two is to suggest to the parent that they read the book too (either before the kid does, or at the same time, or after), so they’re prepared to talk about anything that concerns either of them. Three, if a kid is reading way above their age level (content-wise), they will likely either put the book down, or some things will just sail over their heads; they’ll take something away from the book, but they won’t understand it on every level, and that’s okay. Four, books are the safest places to encounter scary things. Plenty of fantasy and sci-fi scenarios won’t happen in real life (probably, hopefully), but realistic fiction that deals with death, divorce, poverty, bullying, mental health issues, violence, sexual assault, and any of the multitude of things that can and do go wrong in our world…those things happen. If they don’t happen to you, then knowing about them can build empathy for others; if they do happen to you, you know you’re not alone.

A final note: one other way that adults censor kids’ reading is by designating “girl books” and “boy books.” Here, I’m going to turn it over to author Shannon Hale:

Stories make us human. We form bonds by swapping personal stories with others, and reading fiction is a deeply immersive exercise in empathy.

So, what happens to a culture that encourages girls to read books about boys but shoos boys away from reading books about girls?

Read the rest of Hale’s article here: “What are we teaching boys when we discourage them from reading books about girls?” The Washington Post, October 10, 2018

Happy Freedom to Read Week, everyone!