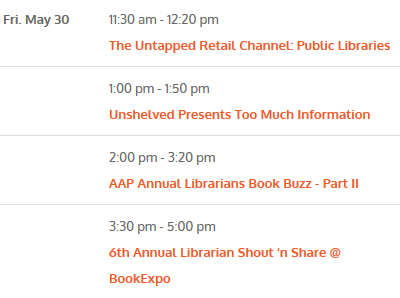 Rebecca Miller, Editorial Director of Library Journal and School Library Journal, moderated a panel discussing “The Untapped Retail Channel: Public Libraries.” Miller wrote an excellent editorial piece before BEA, “Market Powerhouse: A Library Sale is Just the Beginning,” in which she argued, “It’s hard to ignore just how fundamentally important libraries have become to the potential success of a book—that is, if you pay attention to a few simple facts and are willing to question persistent myths.”

The panel included – it must be said – six white guys: George Coe, CEO of Baker & Taylor; Brian Downing, CEO of Library Ideas; Jeff Jankowski, VP and co-owner of Midwest Tape; Steve Potash, CEO of Overdrive; Rich Freese, CEO of Recorded Books; and Matt Tempelis, business manager of 3M. These companies have all already recognized libraries’ ability to reach readers, although libraries remain a “silent market” to publishers. The way Jankowski sees it, “there’s a library in every town in North America,” and the purpose of his company is to get rid of artificial market constraints and give libraries tools to make their jobs easier.

Potash said, “Retail is about creating more readers.” With Overdrive, he aims to provide the best content and most availability for the best value. Freese, whose company provides audiobooks to libraries, said “all books are not the same”; he suggested different models for different books (for example, simultaneous use for debut and backlist titles, 1 copy/1 user for bestsellers). “Librarians want to promote books & authors,” so enable them to do that.

Tempelis agreed that the library market grows the publishing business. There is no “erosion,” i.e. a copy of a book borrowed from a library does not equal a lost sale; rather, people discover books and authors in libraries and go on to purchase them. “We have been listening to libraries and librarians and patrons,” Tempelis said, and their goal is to create a system that is  “intuitive, integrated, synchronized.”

A few more salient points came up during the Q&A. By offering training on e-reading devices, librarians are helping with the physical to digital transition. Libraries loan devices, teach classes, market e-books, and even work with schools. The message to publishers? “Give libraries and readers a better experience. How can publishers let libraries help them reach readers? Stop treating them as adversaries….Libraries are reasonable people willing to pay reasonable money for a better experience.” If publishers make books available in as many formats and models as possible, they will reach more readers. Offer better terms, lower prices, and less friction-creating DRM.

All of this sounded good to the audience, which consisted of many more librarians than publishers, but hopefully the message is getting across.

Unshelved Presents Too Much Information

I missed the very beginning of this talk because I was finishing lunch (say what you will about the Javits, what other conference center has matzah ball soup and knishes on offer?), and when I came in there was a sort of role-play going on, with audience participants earning bottles of beer for imitating patrons in various situations. The presenters then launched into their talk, accompanied by a clear, funny, occasionally depressingly true slideshow. “Too Much Information” had a double meaning: it referred to the amount of information available in the world and the difficulty of sifting the good from the bad that this glut presents, and it also referred to a few brutally honest opinions/truths that have occurred to many librarians, but that we don’t often voice.

“The problem is that we are still informed by our culture.”

Library patrons today have unrealistic expectations of immediate results, but the quickest answer isn’t always best; speed devalues reference service. There’s a false belief that “every question has a fast, easy answer.” This belief stems in part from traditional reference books, such as dictionaries, thesauri, encyclopedias, atlases, and factbooks, but the Internet has exacerbated the problem exponentially. Still, librarians are trying to compete with search engines, which return millions of results in seconds (though, as Neil Gaiman has said, “Google can bring you back 100,000 answers. A librarian can bring you back the right one”). It’s a vicious cycle.

Historically, librarians have been gatekeepers and curators. “Books looked valuable because they were valuable.” Books represent an author’s labor and a publisher’s belief; they have been “vetted” by publishers, reviewers, and librarians. Much online content, unlike books and other physical library materials (magazines, newspapers, movies, music), has not been vetted, yet “people trust it anyway,” considering all information equal. Librarians and other info-savvy folks know that isn’t the case.  (It may be true that “librarians are better at searching than you,” but it sounds bad.) Today, too, “book” no longer equals “quality” either, because “anyone can publish anything.”

The Internet also presents the problem of the filter bubble; people are naturally inclined to read sources that confirm their views rather than challenge them (e.g., not many liberals watch Fox News). When a search engine tailors its results specifically to you, you are rarely confronted with anything you disagree with. Libraries, on the other hand, support different cultural views, offering different viewpoints on the same subjects. (If you’re browsing the poli-sci section, you’ll come across books by liberals and conservatives; even if you only choose to read the ones that are likely to reinforce your own views, at least you’ll know the others exist.)

As people’s limited attention shifts away from books toward other media, some libraries’ message becomes “Come for the Internet, stay for the books.” We put computers in libraries to attract patrons at a time when home computers weren’t necessarily commonplace. After all, books used to be much more expensive, leading to the library as a place for “shared community resources.” Maybe, the Unshelved guys suggest, that mission is defined too broadly, so that in the end we are spread too thin, and not doing anything well.

“In the old days people needed libraries more than libraries needed patrons,” but now it’s the opposite, leading to a “whatever it takes to keep the building open” mentality. But we must remember that we can’t please all of the people all of the time, and we need to “have some dignity” and “reassert our classic identity” (keywords: authority, community, quality, books). We need to “set a high bar for acceptable behavior.” When librarians went from being stern to being approachable, it was a slippery slope from “approachable” to disrespected. We need to reestablish the value of librarians. Stop trying to compete with search engines: provide context for information, be human, have an opinion (politely), and slow down – remember that the best answers are not the quickest answers. Read nonfiction, and “stop buying crappy books” – the noise-to-signal ratio is getting worse. Make people wait longer; ride out the trends (like 50 Shades of Grey). Set a high bar for readalikes. Buy good books. “In the age of too much information, we really need libraries to be libraries.” Trust/know that people need you; consider the library as the center of the community.

This was a great talk, punctuated by much laughter. I don’t agree with every point made here; I don’t believe librarians should go back to being stern and unapproachable, or that the library should be a place of silence and whispers (though it’s nice to set aside at least some quiet space). However, I do believe in the value of a thorough answer over a quick one. It isn’t always easy to convince patrons at the reference desk to wait a minute for more complete information; as illustrated by the Unshelved strip below, sometimes people walk away mid-answer, which is rude as well as self-defeating. Nevertheless, we should try to take the time at every reference interaction to understand the question and answer as completely as possible.

This is quite long enough, so I’ll get to the Librarians Book Buzz Part II and the Librarian Shout ‘n’ Share in the next post.

Join 510 other followers
Back to top
lintzy on the loose