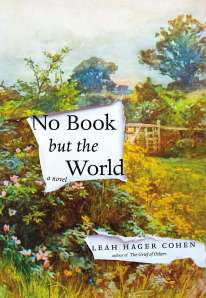 Cross-posted at the Robbins Library blog.

Leah Hager Cohen graced the Robbins Library with her presence on Monday night, reading a section from her newest novel, No Book But the World, in a soft, clear, expressive voice. The passage described the main character, Ava, as a child, playing with her younger brother Fred and overhearing her parents discussing whether or not her mother should teach Ava to read sheet music. Ava wants her parents to keep talking about her, but Fred chokes on a rock, and though Ava gets him to spit it out, their parents come running to Fred’s wails.

Devoted readers will notice what Cohen herself has noticed about her books, both fiction and nonfiction: “All of my books, as I look back on them, seem to engage the idea of “other,” whether in the form of marginalized cultures or the private “otherness” we all sometimes feel in moments of loneliness or isolation. And I see all of them as part of a larger effort to reach out beyond that isolation, to fathom the unfathomable” (quote from a January 2012 interview with Steven Wingate in Fiction Writers Review). Storytelling, Cohen said, is a way of bridging the gaps, making connections between people.

Her new novel, No Book But the World, investigates the question, “What do we do about people in the world who are difficult to love?” The difficult-to-love character is Fred, who likely has an autism spectrum disorder, but his parents, Neel and June, are against “pathologizing the individual,” so Fred remains undiagnosed; Neel and June think Fred is “okay the way he is.” As the book begins, the adult Fred has been accused of a crime, and Ava is convinced that if she can only coax Fred into telling his side of the story, she can serve as the interpreter between him and the world. Ava insists that she knows Fred better than anyone – but how possible is it to know someone else? “Sympathy and empathy can go a long way toward reaching the Other, but it is arrogance to think we can know the Other.” Still, there is the hope that “if only we could tell the story well enough, complete enough, some of the pain of otherness/separateness could be alleviated.”

“Who could ever tell a story complete?” -Leah Hager Cohen, No Book But the World

During the Q&A following the reading, one reader who had already finished No Book But the World tiptoed around the ending, trying not to spoil it for those who hadn’t read it yet; she asked about Fred’s choice near the end of the book. Cohen said that her literary agent had a similar reaction: to most readers, Fred seems like a character the world happens to, but in this case he makes a surprising choice for himself. Though Cohen considered changing the ending, she ultimately kept the original. 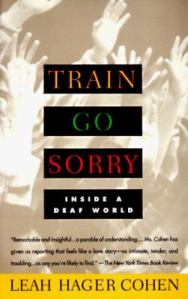 Though lately Cohen has published more fiction (The Grief of Others, House Lights), she started out publishing nonfiction after graduating from Columbia University’s Journalism School. Journalism “seemed like a way to balance my pleasure in writing and being socially useful.” With journalism, Cohen believed, storytelling can help fill in what we don’t know. She quickly realized that “journalism is too often subservient to capitalism,” but turned one of her pieces for school into a book proposal, which became Train Go Sorry.

Another audience member noted Cohen’s exceptional vocabulary. Cohen laughed and put it more baldly: “How come you use all those words?” She answered, “I’m not trying to be inaccessible…I am aware that the tool that I have is English, is language, [and it is] pretty meager compared to all this stuff [life, the world, etc.]…The reason we’re here is to tell each other those things, [but] I can only get part of the way there through words.” She then related a story about first encountering the word “hyperbole”: “Back in adolescence, I remember having an epiphany that the whole idea of hyperbole is fallacious—since nothing we perceive, nor any words we are capable of using to express it, could ever begin to approach the fullness of the thing” (quote from the interview with Steven Wingate).

One of Cohen’s first jobs after graduating from Hampshire College college was as an American Sign Language interpreter. ASL has “a richness of expression in its visual and spatial aspects,” whereas English is linear (one word follows another word). She added, “All of this language stuff is great but it’s not the end.” However, she clearly enjoys language as a tool for play and work; she loved writing even as a child, when sometimes her “desire to enjoy making things out of language sometimes preceded having something to say.”

Though all her books share a few thematic commonalities – for example, people’s struggle to connect with and understand other people, especially those who are different – Cohen said she doesn’t rely on an outline and doesn’t plan what to write. She quoted E.L. Doctorow: “Writing is like driving at night in the fog. You can only see as far as your headlights, but you can make the whole trip that way.”

“For why are we here if not to try to fathom one another? Not through facts alone, but with the full extent of our imaginations. And what are stories if not tools for imagining?” -Leah Hager Cohen, No Book But the World