Last January’s Harry Potter trivia was so successful that we decided to do it again on the last Saturday of July, as close to Harry’s birthday (7/31) as possible. Once again, registration filled up and we had a few on the waitlist (not as many as last time, but I suspect that has to do with it being summer and lots of people being away on vacation).

The program still required plenty of (team)work to run, but it was easier and smoother the second time around.

Another added element to the program this time around was the display of LEGO Hogwarts, which had been build in the preceding weeks by kids (10+), teens, and adults in eight separate weekend and evening sessions. They did an incredible job and finished just in time! (Now, we’ll have to see if anyone wants to take it apart in such a way that it can be built again.) 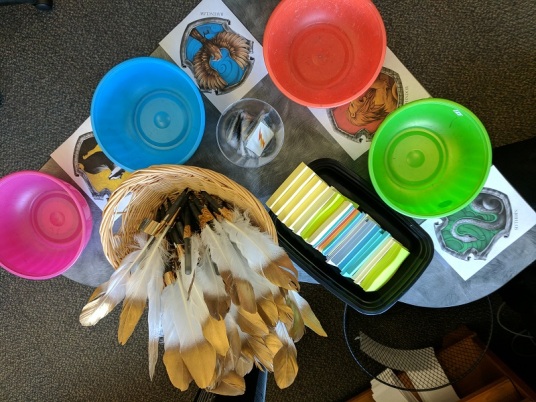 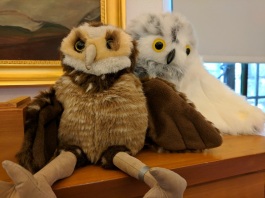 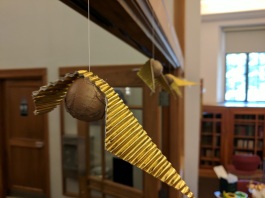 Despite opening the doors and starting registration before our 2pm start time, the program did run past 4pm. I’m not entirely sure why, but I think it was in part due to some younger teams taking longer to turn in answers, and partly me adding short breaks between most question rounds. Next time, just one break about halfway through, and full steam ahead (from Platform 9 3/4, naturally) the rest of the time.

Like last time, we had seven rounds of five questions each, one round per book in the series. We started with a practice question (for no points) and had some between-rounds questions for no points too – teams would just raise their hands, and I tried to let everyone who wanted a turn get to answer. 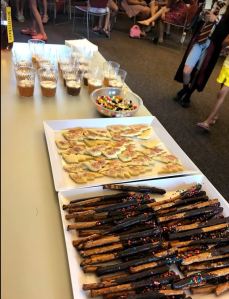 There were some really clever team names (Granger Danger was my favorite), and I was so happy to hear that at least one team at the event had been waitlisted for trivia in January, and were able to come to this one. There was also a team that left after round four because the kid on the team hadn’t read books five through seven yet, but said they’d had a wonderful time.

The questions were just about right, with most teams being very successful but not perfect (we didn’t want a fourteen-way tie for first!). Most of the snacks got eaten; we had pretzel wands, lightning bolt sugar cookies, jelly beans, and butterbeer. Some people used the Daily Prophet photo frame to take pictures.

Our door prizes were House-themed socks (Gryffindor socks for the Gryffindor winner, etc.), first prizes were Harry Potter postcard coloring books, and two teams tied for second place. One of the “teams” was a girl playing on her own, so I let her have first choice between Harry Potter themed socks (“Mischief managed,” etc.) and a vial of Felix Felicis (not edible! but good for putting on a necklace). The other second place team also chose between socks and Liquid Luck and everyone seemed pretty happy.

What to do differently next time

Other than running slightly over time, which no one seemed to mind, everything went smoothly, but there are always small improvements to be made – mostly to do with making the scorekeeper’s job easier.

LEGO Hogwarts on display; a happy team on the front page of the Daily Prophet; a pile of answers on post-it notes

One thought on “Happy birthday, Harry Potter! More HP trivia at the library”