This evening I went to a screening of some TED talks at MIT, sponsored by the New England chapter of ASIS&T. We watched five TED talks, with a little bit of discussion between each one.

1. Raghava KK, “Shake up your story” – the artist/father talked about how looking at multiple perspectives could lead to the development of empathy and increase creativity.

2. Wael Ghonim, “Inside the Egyptian Revolution” – Ghonim described how the Internet allowed Egyptians to connect, to realize they were not alone and had shared dreams, to collaborate and speak out. He described how the “psychological barrier of fear” led to silence, but because of the Internet, “the fear is no longer fear, it’s strength. It’s power….The power of the people is much stronger than the people in power.” (After the talk, we discussed the flip side of technology: in the case of Egypt, technology allowed people to overcome their isolation, but what about when the government controls the technology?)

3. Eli Pariser, “Beware online filter bubbles” – This was the talk I found most interesting. Pariser, an online organizer and author, talked about the invisible shift in the flow of information online; search engines show us what they think we want – but what we want to see might not be what we need to see. Although the “personalization” due to algorithmic editing can sometimes be helpful, most people don’t realize that results are being filtered or tailored in this way – and we don’t decide what gets included or what gets left out.

Left to their own devices, people tend to read sources that re-confirm their existing points of view, and this was true long before the Internet (some people read the New York Times, some read the Wall Street Journal). Editors used to be our “human gatekeepers,” but now there are algorithmic gatekeepers, and they have no concept of journalistic integrity or ethics: they just want to show us what we want to see. Eventually, we may end up with a diet of “information dessert” and no “information vegetables. The information might be “relevant,” but we won’t be presented with information that is uncomfortable, challenging, important, or that presents other points of view – and we may become less and less aware that this information exists.

This addresses only a small piece of this issue, but check out the Google Transparency Report.

4. Sunni Brown, “Doodlers, Unite!” – According to Brown, doodling during a meeting isn’t a waste of time, and it doesn’t mean you aren’t paying attention – in fact, it may be helping you process information better. (After all, don’t many group brainstorming sessions end up using a whiteboard or pen and paper to sketch out ideas?)

One of the discussion questions (offered somewhat tongue-in-cheek, I believe) after this last talk was, “Do you think the invention of washing machines has increased library circulation?” In a roundabout way, it probably has: in the industrialized world, washing machines and other time-saving devices allow us to have more leisure time, which some of us do spend reading. 🙂

Many, many more TED talks are available “free to the world.” Explore, and enjoy! 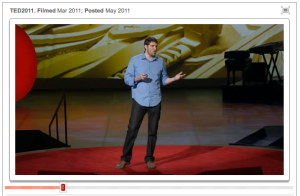